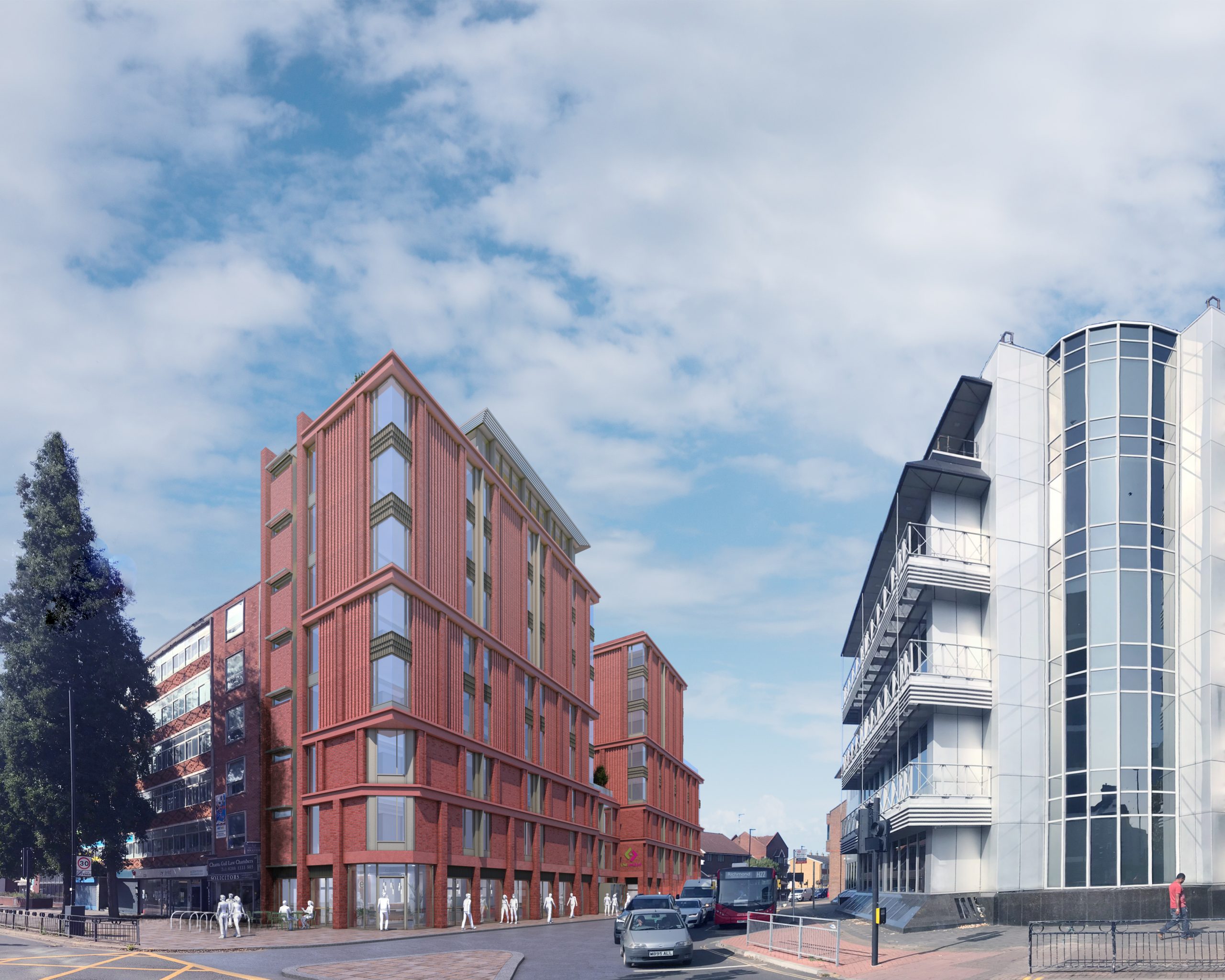 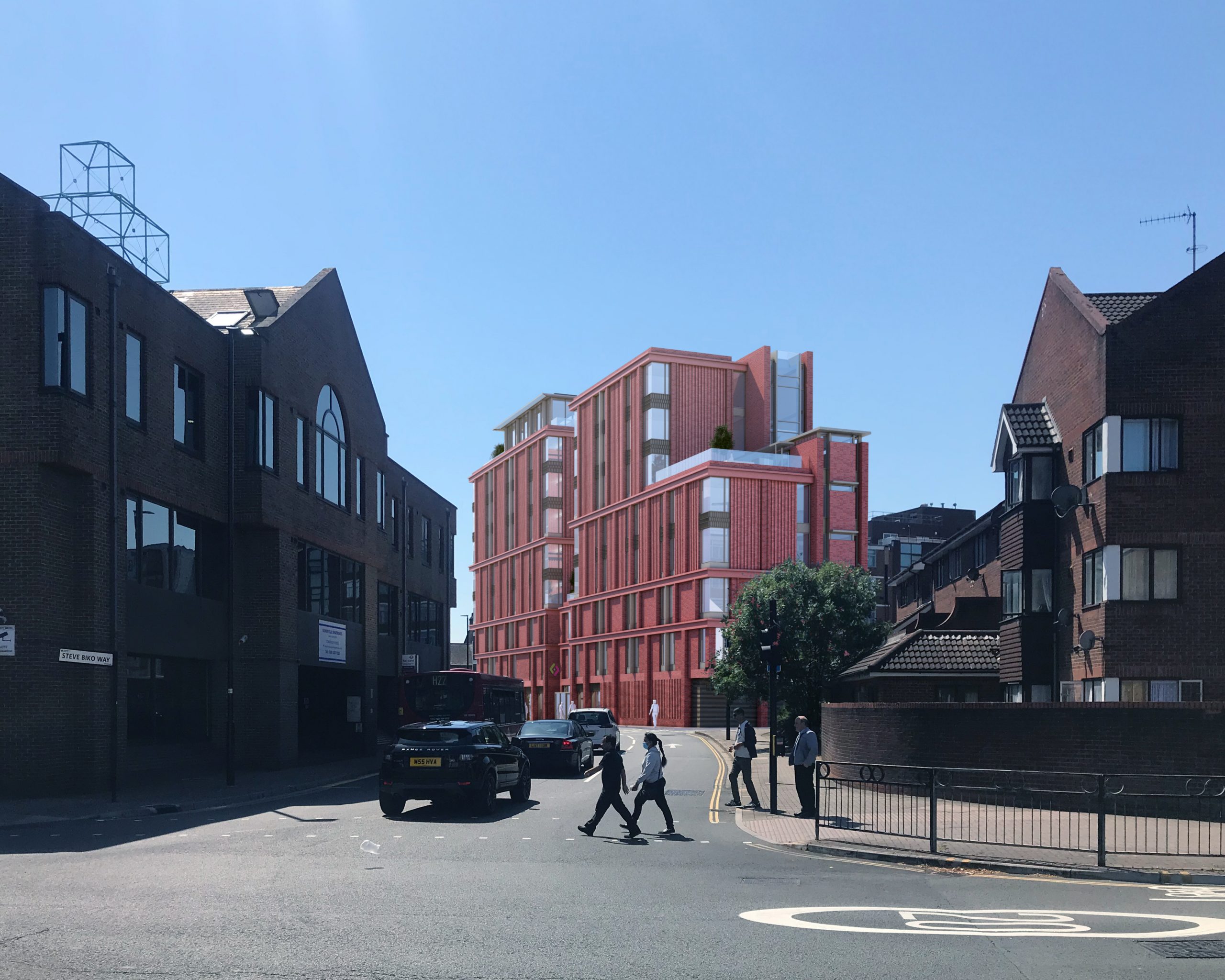 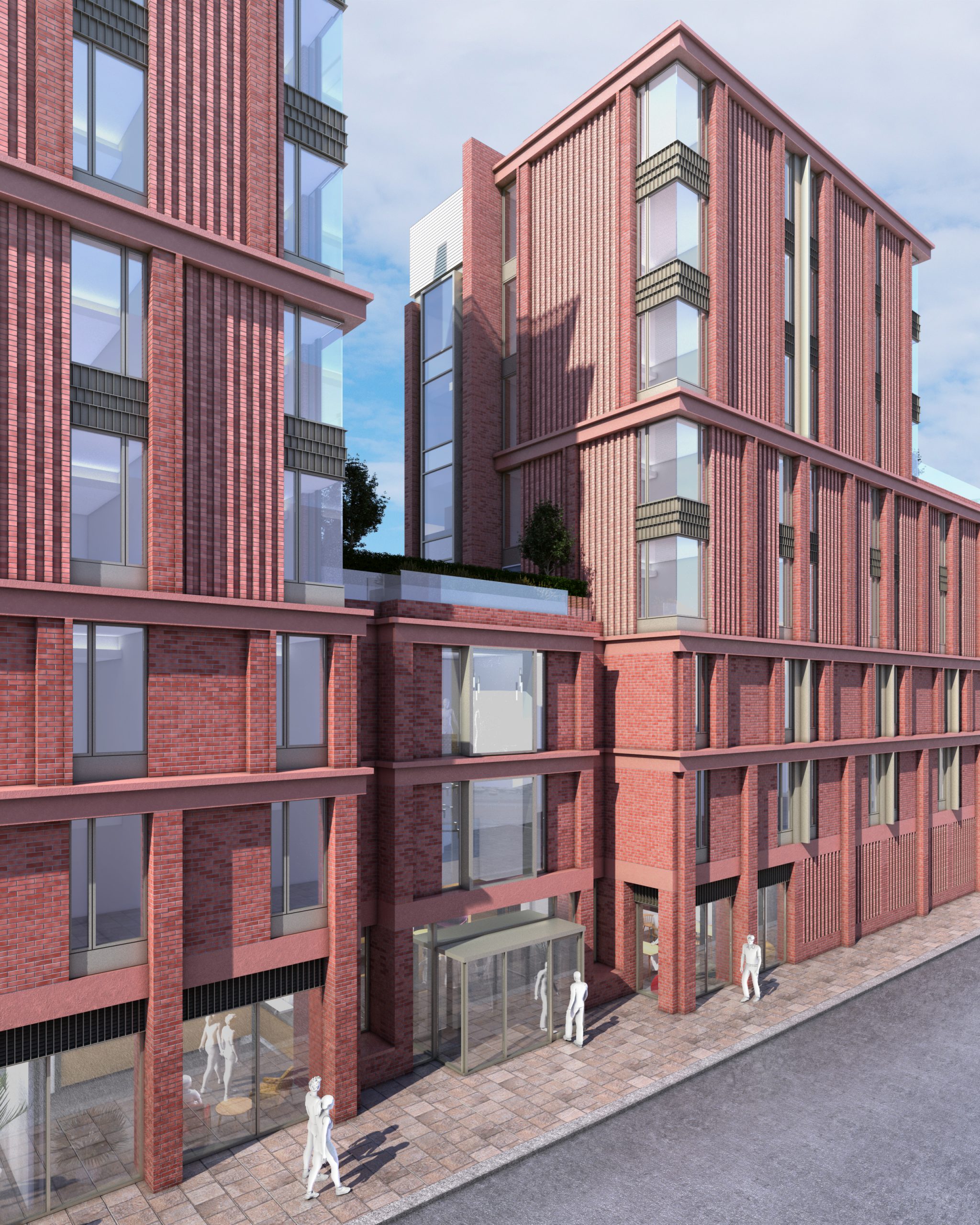 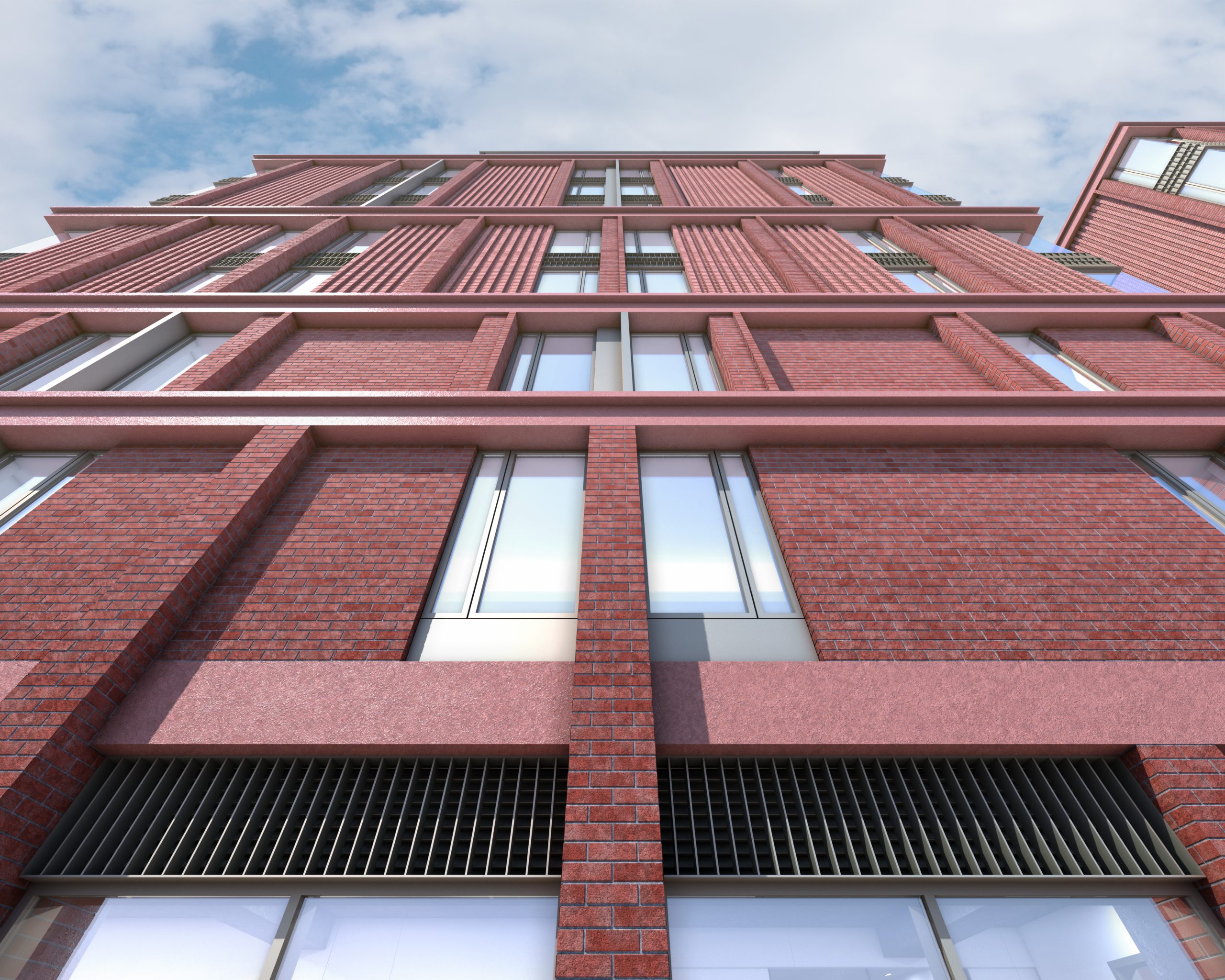 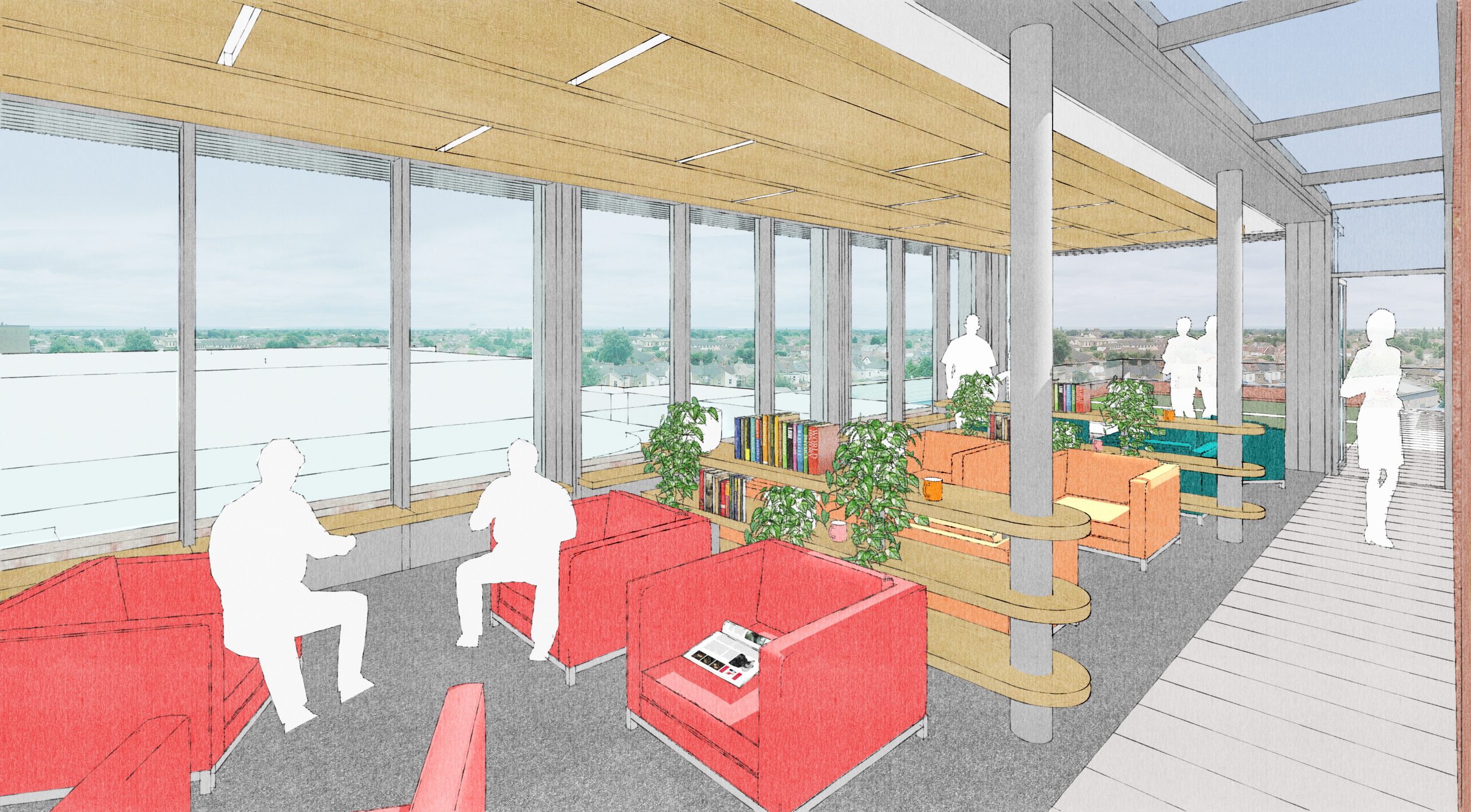 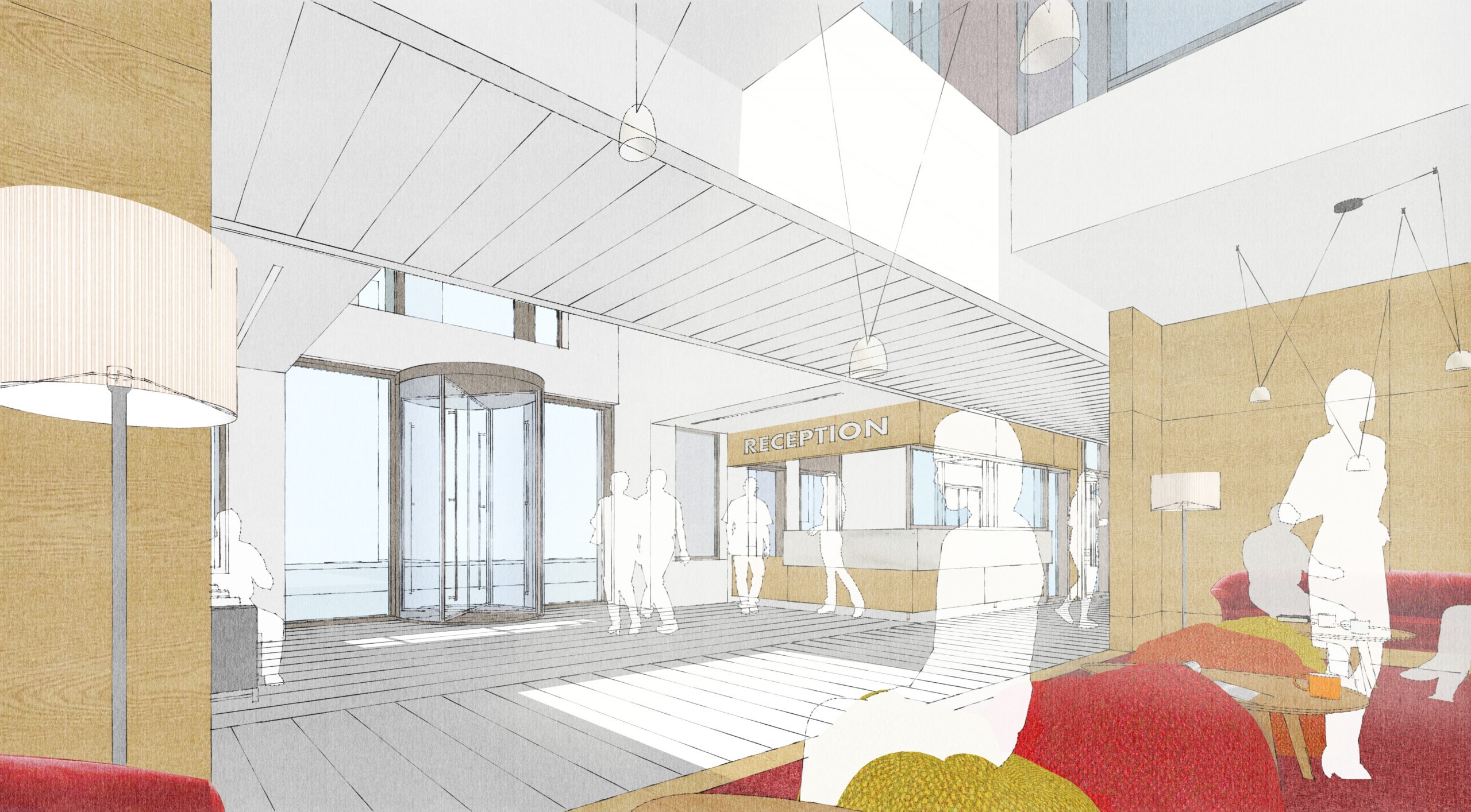 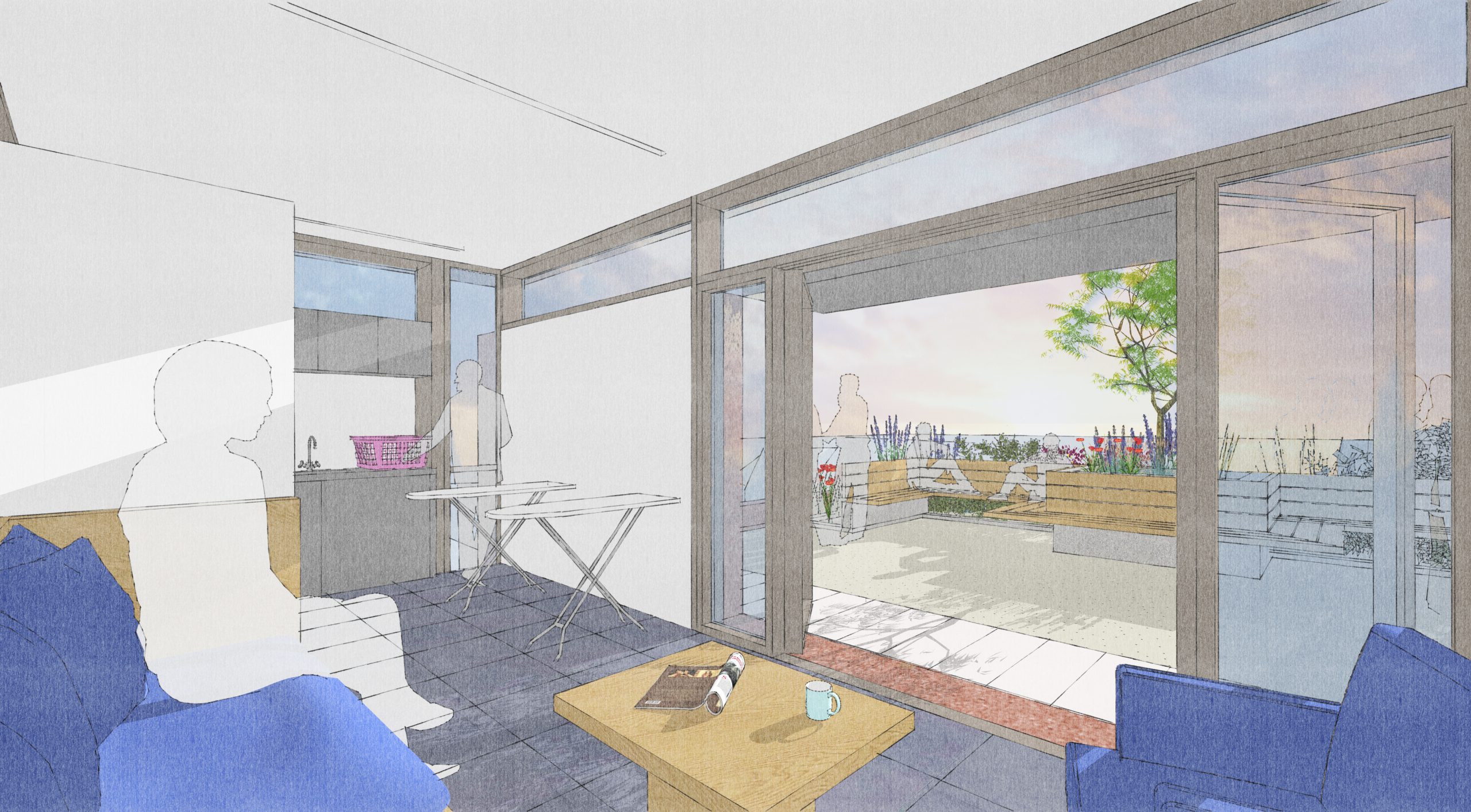 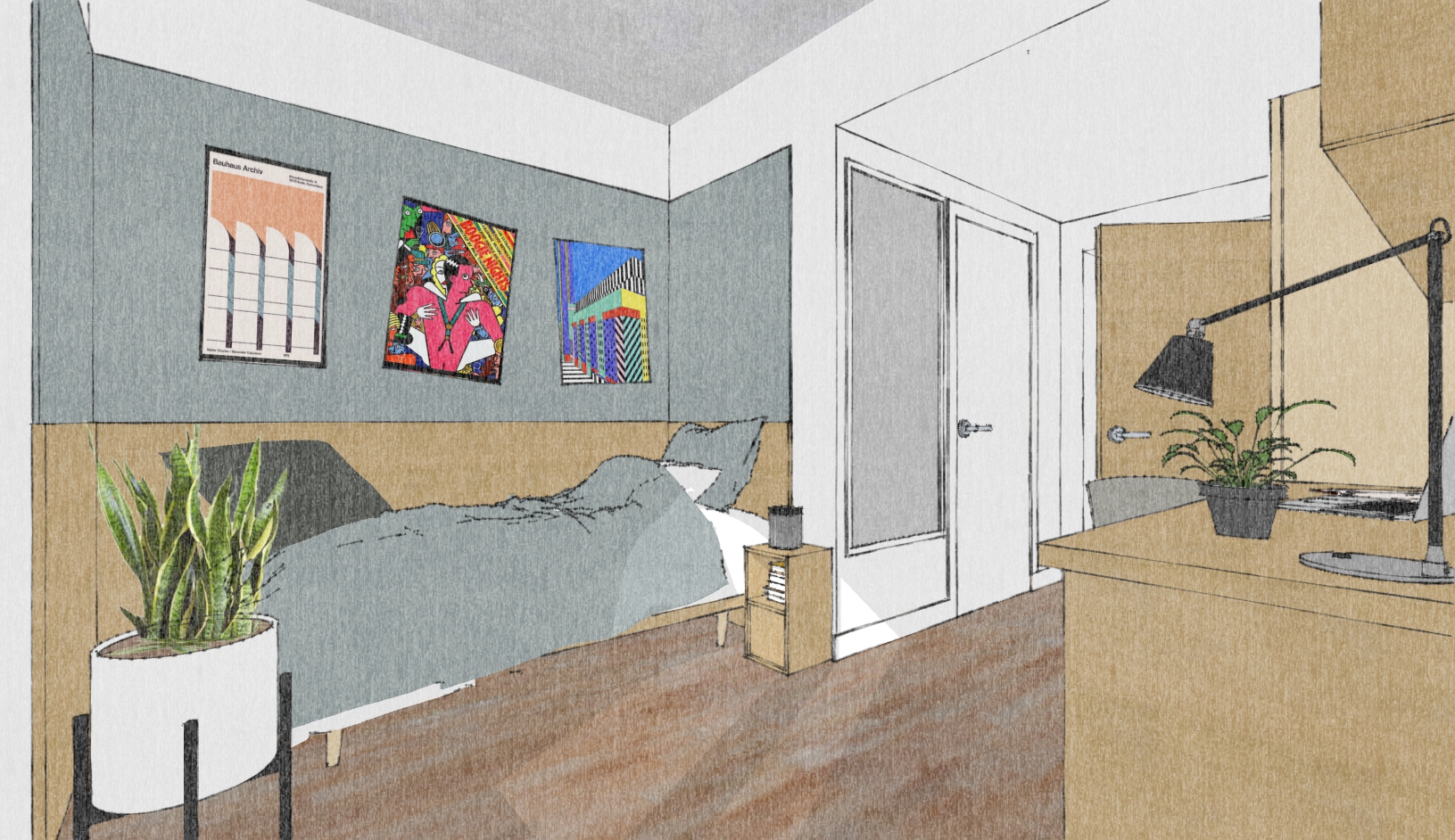 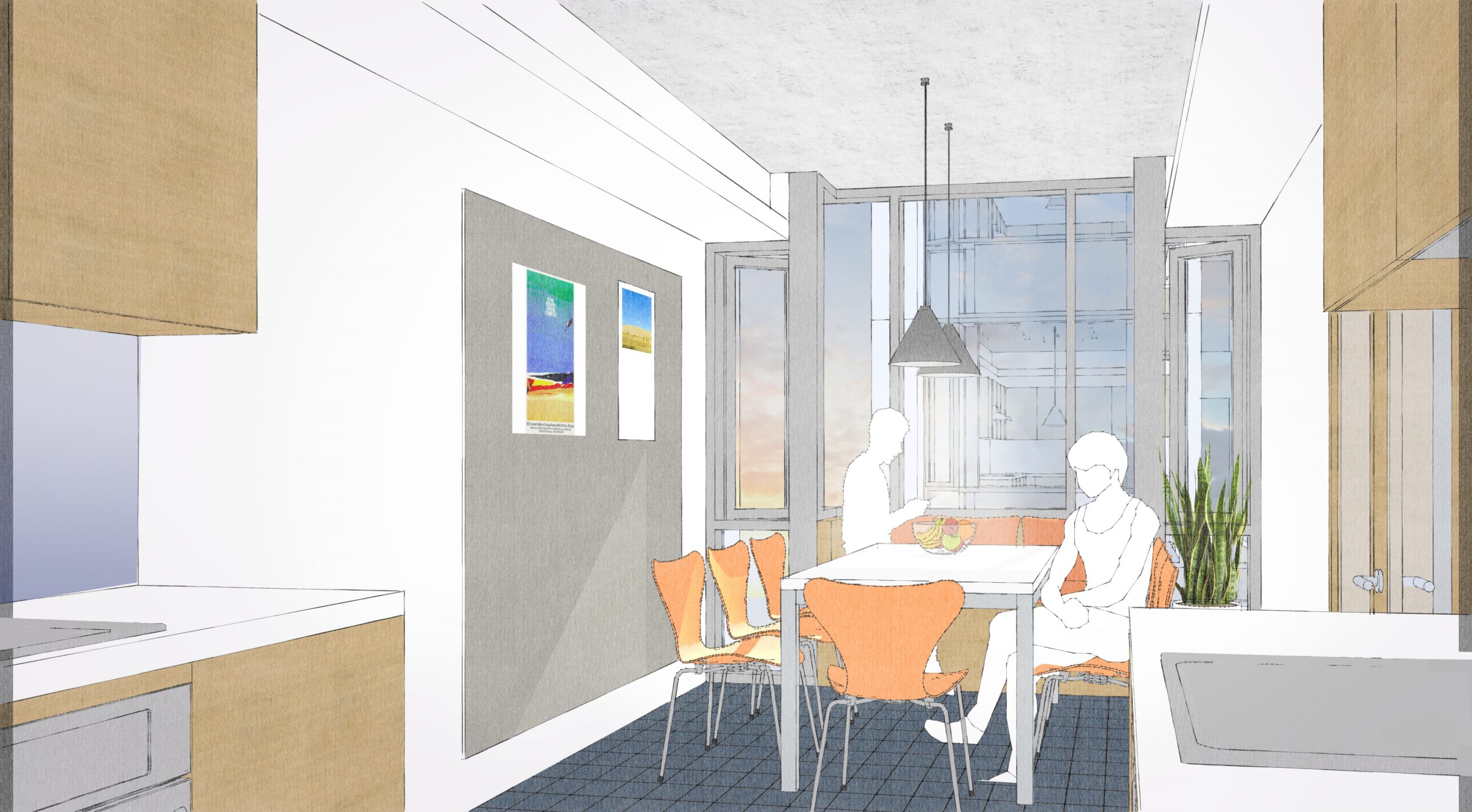 This is MJP’s third project for the LHA, a charity which provides accommodation on a flexible and affordable basis in London. The development includes 107 single en-suite rooms, shared kitchens for
8-9 residents and a range of shared communal facilities. A café/workspace, open to the wider public and residents alike is also provided, integrating the hostel into its immediate surroundings.

The site is narrow and long and has a number of environmental and physical constraints. It lies directly beneath the Heathrow flightpath and this combined with the vehicular traffic from Steve Biko Way and Staines Road leads to high external ambient noise levels.

LHA began its journey developing quality affordable co-living accommodation with MJP Architects over 20 years ago, and we are delighted to further continue our relationship with the latest project in Hounslow

An existing hotel sits on the site, converted from an earlier 1970’s office block. Initial studies looked to incorporate this building into the proposals but its layout and structure did not lend itself well to efficiently optimising the site.

This building pre-dates Steve Biko Way, which subsequently cut through a neighbouring site. The creation of this thoroughfare led to an exposed blank gable, never designed as a street frontage, creating a bleakness and a lack of public activity along Steve Biko Way.

The new development, with a re-orientated primary elevation, offers a fantastic opportunity to re-engage with and improve the public realm. The proposals create a building which, for the first time in 40 years, truly addresses the prominent corner site and the public realm transition from Staines Road to Steve Biko Way.

It achieves this by re-allocating greater space to the pavement, locating the LHA entrance at the centre of Steve Biko Way, and by creating a highly transparent and vibrant ground floor. The entrance is at the heart of the building plan and offers easy, equal access from the nearby Hounslow Central tube station and the town centre, and once inside to the two circulation cores.

A unique blend of design quality and affordability is key to providing the sort of flexible living needed by our residents, and gives young single people the chance of an economical, safe and secure place in London’s costly rental market

We have devised a set of organisational principles, based on the plan, to develop the elevations in a rational and yet playful way.

A ‘frame’ has been applied to the primary East elevation defining a scale and rhythm derived from the module of a single room. It provides a depth to the elevation with repetitive vertical elements casting shadows along the East façade.

The columns shift horizontally by half a room module as they rise up the building, helping to emphasise and give priority to the three distinct horizontal beams. These beams help to tie the building together either side of the entrance and the columns, semi-engaged columns and engaged columns span vertically between them.  One half of the space between the columns is given over to solid/brick whilst the other half is void/window. The columns and beams are profiled to protect against unwanted solar gain and weather staining respectively.

The site is long and slim, which led us towards an easily legible, narrow plan diagram, based on access to outlook, available natural light and a clear hierarchy of internal spaces

The ‘base’ unites the whole building across the lower levels. It is designed to appear more solid, albeit with a highly glazed ground floor. The ground and first floor elevations have been coupled to create a series of double order taller column, appropriate to the scale of the building.

The ‘middle’ band springs from the base and will appear less solid – infill panels within the frame appear lighter, with ‘corduroy’ brickwork used to express the vertical span. The ‘middle’ emerges as the top of the building to the north, with its double height order acting as an appropriate ‘top’ to the lower five storey elevation.

The ‘top’ band is a three storey section relating to the South block only. It too employs vertical corduroy brickwork to emphasise the span between the primary horizontals.

The elevation will be viewed obliquely when looking along Steve Biko Way and the depth of the beams and the offset columns will cast a playful shadow and add to the sense of movement along this elevation.

The elevation is layered, with a calm, symmetrical outer frame of strong cast-stone horizontal spandrels, within which we have a rhythm of syncopated brick pilasters, which shift by half a room module from floor to floor creating a lively and surprising composition in masonry

Shared facilities have been carefully located to encourage their use and to foster a sense of a community. The ground floor circulation is kept short, and widened. It is generous, includes post boxes, vending machines and book shelves. In effect it is elevated to a transition space as opposed to a simple corridor.

Key internal shared spaces are twinned with external terraces, creating more attractive internal environments and giving increased prominence to the external spaces. The prime area of the building is given over to a large shared common room, giving each resident access to a south facing roof terrace with fantastic views south towards Twickenham.

Due to the harsh external environment it was necessary to use mechanical ventilation. However, through the use of ASHP’s, roof mounted ASHP’s and PV cells, energy efficient systems and a highly insulated envelope the proposals achieve an overall improvement of regulated emissions of more than 63%. The flat roof works very hard, with all areas providing locations for either energy efficient plant systems, external amenity space or biodiversity. The proposals will achieve a BREEAM ‘Excellent rating’ and avoid the use of gas entirely.

MJP previously designed Friendship House for the LHA in Southwark, and Torquay House in Westminster. Within a limited budget, our designs have provided a distinctive identity and attractive living environments which have contributed to their popularity.